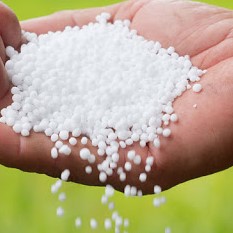 Urea is considered to retain moisture, promote healing and dissolve the skin. It is classified as harmless.

In our products we use nature-identical, highly pure urea.

Urea was discovered in the 18th century when urine was examined. Until it was discovered that urea could also be produced from inorganic substances, it was usually extracted from horse urine. Since 1828 the substance has been produced artificially/synthetically and contains no animal components.

The urea we use is a synthetic product. However, just because an ingredient has been synthetically produced, it does not automatically mean that it is inferior to substances of natural origin. In fact, urea in particular has been denigrated for a long time because it was suggested that products containing urea contain urine of animal origin. For a long time, however, urea has been produced synthetically. Thus, urea is identical/nature-identical to urea of natural origin in terms of its physiological properties. Chemically it cannot be distinguished from urea derived from animal urine.

Urea is urea, a component of urine. However, it is also excreted through sweat and thus reaches the skin. Urea is a fatty substance and ensures that the skin does not dry out. Normally, the body should produce enough urea to protect the skin.

In cosmetic products, urea is mainly used for its moisturizing properties. As urea is able to bind water, it is mainly contained in skin care products like creams for dry skin. This makes the skin smooth and supple. Depending on the concentration of urea in a product, it also has antimicrobial and anti-itching properties. Typical application concentrations of urea in cosmetics are about 3 % in body lotions and 5 to 10 % in creams and ointments.

If we wash ourselves too often with soap, shampoo and shower gel, we damage the skin's natural acid mantle. The skin can then no longer protect itself from pathogens and can also become dry. Dry skin can of course have other reasons.

Urea consists of carbon dioxide and ammonia, which combine to form urea in a chemical process under high temperature and pressure.

Body lotions containing urea are said to be able to stabilise the skin's moisture balance again. Other components of moisturisers, such as oils, only help dry skin for a short time, as they cover it with a nourishing layer. Urea, on the other hand, penetrates the skin, absorbs and stores water. This enables the skin to store this moisture. However, even urea cannot permanently solve the problem of dry skin.

Urea is also interesting for cosmetics manufacturers because it is so kind to the skin: there are no known side effects or allergic reactions to urea.

In addition, urea is said to have a slight antibacterial effect and to strengthen the natural skin barrier.